#MeToo: When Do We Forgive? 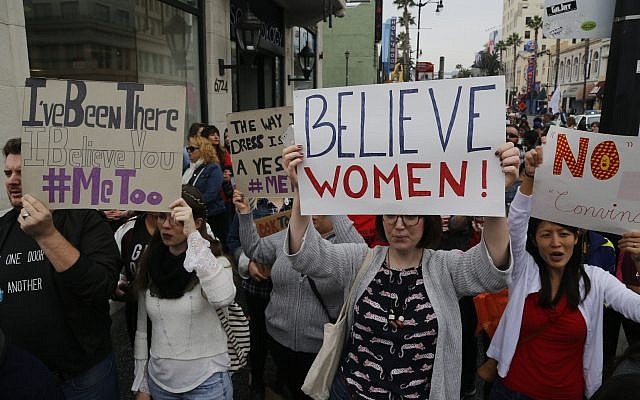 When the #MeToo movement picked up late last year, it seemed as though new misconduct allegations against powerful men in Hollywood came about each week — or, in some weeks, every few days. Regardless of whether the men owned up to the alleged acts or denied the accusations altogether, their careers were often immediately affected: Amazon fired “Transparent” star Jeffrey Tambor, accused of harassing a former assistant and co-star; Louis C.K., who admitted to masturbating in front of unwilling female comics, had the theatrical release of his film “I Love You, Daddy” canceled; a number of well-known actors declared they would never again work with Woody Allen, whose daughter has long accused him of sexual abuse; and so on.

A question associated with most burgeoning movements quickly arose: What happens next? #MeToo has spread internationally and shed a light on the power dynamics that enable despicable behavior. Those who come forward might look to Time’s Up, the legal defense fund and advocacy group created to support victims of sexual harassment, assault and abuse in the workplace. But, as a widely circulated New York Times op-ed recently asked, what do we do with the accused men in the long run?

This week, close friends and family of the three aforementioned men presented their solution: Give them another chance.

Though he denied sexually harassing assistant Van Barnes and co-star Trace Lysette on the set of “Transparent,” Tambor told the Hollywood Reporter earlier this month that he has yelled and acted aggressively toward several colleagues in the past, including directors and showrunner Jill Soloway. He also acknowledged a “blowup” directed at “Arrested Development” co-star Jessica Walter, whose representative told the magazine at the time that Walter “does not wish to talk about Jeffrey Tambor.”

That changed in an emotional interview with the cast of “Arrested Development” published Wednesday by the Times ahead of the debut of the Netflix show’s fifth season.

As Walter attempted to address Tambor’s behavior, her male co-stars interjected in his defense. Jason Bateman said it is common for people in the industry to be “difficult” because “what we do for a living is not normal,” a sentiment that Tony Hale echoed. Only Alia Shawkat challenged it, saying that it “doesn’t mean [the behavior is] acceptable.” David Cross added that it was important to remember Tambor “learned from the experience and he’s listening and learning and growing.”

Finally, Walter said tearfully: “Jason says this happens all the time. In like almost 60 years of working, I’ve never had anybody yell at me like that on a set. And it’s hard to deal with, but I’m over it now. I just let it go right here, for the New York Times.”

Bateman apologized Thursday morning for attempting “to mansplain, or fix a fight, or make everything okay” instead of listening to how Tambor’s outburst affected Walter. Hale tweeted that his own “words, both said and unsaid, served to minimize Jessica’s pain and for that I am extremely sorry.” But it doesn’t appear that Tambor will face any consequences for the incident. Netflix submitted his “Arrested”role to be considered for an Emmy, an award he won in 2015 and 2016 while still the lead actor of “Transparent.” (The Washington Post has asked Netflix for comment.)

Sarah Silverman expressed in an interview with GQ also published Wednesday that she hopes her once-acclaimed friends C.K. and former senator Al Franken, accused of groping and forcibly kissing multiple women, also have the opportunity to redeem themselves.

“I think that there are people who were caught and there were people who were not caught, but the important thing is that they are forever changed,” she said, referring to C.K. “And if that’s the case, I don’t see any reason why they can’t continue being artists. . . . There are people that come and say, I’m guilty of these things, and I’m wrong, and I want to be changed from this. And yet those are the ones that kind of are excommunicated forever.”

GQ noted a lingering sense of resignation in her voice, one evident in a less sympathetic reaction to the C.K. allegations that she shared in a November cold open of her Hulu series, “I Love You, America.” The Times had published accounts of his misconduct the week before.

“This recent calling out of sexual assault has been a long time coming — it’s good,” she said on the show. “It’s like cutting out tumors. It’s messy and it’s complicated and it is going to hurt, but it’s necessary and we’ll all be healthier for it. . . . The only people that matter right now are the victims.”

Acknowledging that she “may have cognitive distortion,” Silverman also told GQ that she believes “in my heart of heart of hearts” that Franken is innocent and “got bullied into resigning.” (The Post has contacted Silverman’s representatives seeking comment.)

While Silverman and the “Arrested Development” cast members all agree that some form of misconduct occurred — aside from Silverman’s defense of Franken, that is — Moses Farrow explicitly wrote in a blog post, published the same day as the Times and GQ pieces, that his father, Allen, “continues to be condemned for a crime he did not commit.” (Farrow’s sister, Dylan, has been an outspoken advocate of the #MeToo movement and holds that Allen sexually abused her when she was 7.) Farrow cites his supposedly vengeful mother, Mia Farrow, and the media’s “lack of long-term memory” as the reason behind the disparagement of Allen. He made similar claims years ago.

“To those who have become convinced of my father’s guilt, I ask you to consider this: In this time of #MeToo, when so many movie heavyweights have faced dozens of accusations, my father has been accused of wrongdoing only once, by an enraged ex-partner during contentious custody negotiations,” Moses wrote, ending with: “But, after all this time, enough is enough. You and I both know the truth. And it’s time for this retribution to end.”

On Twitter, Dylan called her brother “a troubled person” and wrote that the post is “beyond hurtful to me personally, and is part of a larger effort to discredit and distract from my assault.” Their brother, Ronan, who shared a Pulitzer Prize with the Times for his Harvey Weinstein exposé published in the New Yorker, added, “My sister’s allegation is backed by a significant body of credible evidence, including physical evidence and eyewitnesses to abuse. . . . I believe my sister.”