From Here to Maternity 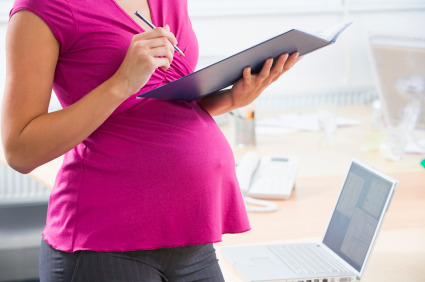 Why all of the hoopla about women in the workforce? Because women in the corporate world are still not treated as true C-Suite equals and it’s worse when we decide to have a family. I believe that it all comes down to basic physiology (we are the ones who “birth-the-babies”).

Women are not viewed as the tough, business-driven leaders, who can really run a corporation. This perspective is not trumpeted by men; however, as a female in business, you can subtly sense the way others relate to you and how dramatically they change when you get pregnant.

I’m not saying that [Sheryl Sandberg](http://www.forbes.com/profile/sheryl-sandberg/) ever had a male co-worker put his hand on her swollen belly cooing about how he remembered when his wife was pregnant, but I, as a bank president in 1985, did. Things haven’t really changed that much; it’s just that today we are more politically correct.

If Joan Rivers were with us today, she probably would have backed me up and quipped the above phrase when asked if this sentiment about women in the workplace is still alive and well today. Just get a group of women together in a safe environment and ask them to tell you their horror stories surrounding how they were treated when they became pregnant.

My horror story happened in 1974, at [Chase](http://www.forbes.com/companies/chase/) Bank. I was hired to attend the prestigious Global Credit Training Department, groomed to be a lender. (By the way, I was hired at the salary that my male counterparts were earning; $11,000 per year. After a few weeks, the female head of personnel called me in to tell me that, “As a young woman I should not be earning what the men were,” and she lowered my salary to $6,500 a year. I asked what I had to do to earn an equal pay.

She said, “Graduate first in the class.” I did; she didn’t.) Even worse, was the time when a Senior Vice President, who was my sponsor for the credit training, called me into his office before I started and announced that I was not to get pregnant. He was paying a lot for me to attend this program and he was not going to put up with me becoming pregnant. I assured him that that was not my plan. Oops. I did become pregnant and frankly, my husband and I were thrilled. I, for some reason felt compelled to inform the Senior Vice President of my pregnancy. He flew into a fit and started yelling at me. “I’ll pay for the abortion,” he screamed. *No comment*. Unfortunately, I lost the baby. Weeks after that, he cornered me in the hall and said, “You made the right decision.” *Nocomment*. About six weeks later, he died of a massive heart attack. *No comment*.

Women are [half of the U.S. workforce](http://www.dol.gov/wb/factsheets/Qf-laborforce-10.htm), and as John Kiernan, in his [article](https://wallethub.com/edu/best-states-for-working-moms/3565) entitled, “2015’s Best & Worst States For Working Moms,” writes, “…they still earn about three-quarters as much as men do and have far less upward mobility, as evidenced by the fact that less than 5 percent of Fortune 500 companies have female chief executives.” President Obama even mentioned this glaring gender wage gap in his [State of the Union address](https://www.whitehouse.gov/the-press-office/2014/01/28/president-barack-obamas-state-union-address) by citing the average figure that woman makes as seventy-seven cents for every dollar a man makes. Obviously, pay is one reflection of someone’s worth to the corporation.

You can’t nail down any of the data, but it’s real. [The Economist](http://www.economist.com/blogs/democracyinamerica/2015/01/women-and-work), in a blog article entitled, “What’s holding women back?*”* cites research indicating that, “…pregnant women are perceived as less authoritative and more irrational, regardless of their actual performance. Mothers are often seen as less committed to work than non-mothers. Fathers meanwhile are not only viewed as equally competent as men without children, but also significantly more committed to work.

As a result, while mothers are often penalized for their family commitments, fathers tend to be ‘recommended for management training more than men without children.’ Researchers describe this phenomenon as a ‘motherhood penalty’ and a ‘fatherhood bonus.’”

[Pew Research](http://www.pewsocialtrends.org/2015/01/14/women-and-leadership/) found in a study that, “… the majority of Americans think women are just as capable of being good political and business leaders as men.” To further the point, [The Economist](http://www.economist.com/blogs/democracyinamerica/2015/01/women-and-work) points out that, “They are perceived as indistinguishable from their male peers when it comes to leadership qualities such as intelligence and capacity for innovation. On other qualities—honesty, fairness, compassion and willingness to compromise—many Americans actually judge women as superior.” So, why is there a lack of women in leadership positions?

The great news is those rare women in the C-suite are actually earning more than their male counterparts. [CBS News](http://www.cbsnews.com/media/the-top-10-highest-paid-female-ceos/), citing a study conducting by [Equilar and the Associated Press](http://www.equilar.com/reports/19-associated-press-pay-study-2015.html), notes that “…the median pay for women CEOs rose to $15.9 million, a 21 percent gain from a year earlier… compared with a median pay for male CEOs of $10.4 million, which was down 0.8 percent from 2013.” The study also showed that [Marissa Mayer](http://www.forbes.com/profile/marissa-mayer/), CEO of [Yahoo](http://www.forbes.com/companies/yahoo/) made the “Top 10” list of highest paid executives; however, findings also showed that there were only 17 women at the CEO-level, compared to 340 overall.

We know that everyone does better when women share the reins of power. Ms. Sandberg and Mr. Grant, in their recent *[New York Times* op-ed]([http://www.nytimes.com/2014/12/07/opinion/sunday/adam-grant-and-sheryl-sandberg-on-discrimination-at-work.html](http://www.nytimes.com/2014/12/07/opinion/sunday/adam-grant-and-sheryl-sandberg-on-discrimination-at-work.html)), say that “Start-ups led by women are more likely to succeed, innovative firms with more women in top management are more profitable; and companies with more gender diversity have more revenue, customers, market share and profits.”

It’s not the overt discussion, it’s the covert one. It’s the covert ones that hit us viscerally. Americans resist letting women and power go hand-in-hand. There is some emotional cord that is struck when people think of a female leader. The whispers of, “She is an uppity female” or “She should be home raising her kids” are often heard. Or, how about the swear word we use for a tough, decisive woman? As The [Economist](http://www.economist.com/blogs/democracyinamerica/2015/01/women-and-work) puts it, “At the end of the day, we simply lack enough compelling models for what female power should look like. This should change as more women manage to break into leadership roles. Soon, perhaps, a powerful woman won’t appear threatening or aspirational, but simply normal.”