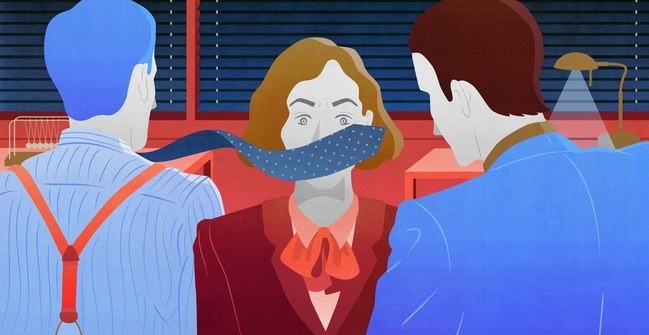 Excerpted from The New Yorker

In 1996, twenty-three female brokers sued Smith Barney for sexual harassment and pay discrimination in what became known as the “Boom-Boom Room” case. Nearly two thousand women nationwide joined the lawsuit after it was granted class-action status and, in the end, Smith Barney paid the women a hundred and fifty million dollars in settlements and arbitration awards. Yet, as powerful men in a variety of industries have been forced out in recent months for workplace sexual harassment, fewer senior executives in finance, as compared to other fields, have been ousted. Why? There is little doubt that finance has had just as many cases of sexual predation as other industries, and perhaps more. Finance is a male-dominated industry and the few women who manage to enter it, and to climb its ranks, often become the targets of the men who work there.

Renée-Eva Fassbender Amochaev, a broker who successfully sued Smith Barney for gender discrimination in a [subsequent case](http://www.sfgate.com/bayarea/article/Smith-Barney-to-pay-33-million-in-bias-case-3200632.php “subsequent case”) when it was part of Citigroup, told me that the way Wall Street firms resolve sexual harassment cases continues to protect perpetrators and firms. Large settlements are paid, but the men who either committed the bad behavior or who effectively condoned it, often remain. “No one gets fired,” she said. “Everyone on the inside knows the system is rigged.” And, because the settlements are confidential, the incidents are kept quiet. “The bad behavior doesn’t become public,” she told me. “The end
result remains a secret which ultimately perpetuates the problem.”

In 2010, three female former employees of Goldman Sachs—a former vice-president, a managing director, and an associate—filed a
class-action lawsuit in federal court against the firm claiming that it systematically discriminated against women in both pay and promotions. In the complaint, one of the women—H. Cristina Chen-Oster, who spent eight years at the firm and became a vice-president before leaving, in March, 2005—told the story of how, in the fall of 1997, members of her department went to Scores, a topless dance club in Manhattan, to celebrate a colleague’s promotion. Later that night, a married male associate insisted on walking Chen-Oster to her boyfriend’s apartment a few blocks away. Once there, the male associate ended up “pinning her
against a wall, kissing and groping her, and attempting to engage in a sexual act with her.”

The complaint stated that Chen-Oster did not “invite or welcome the attempt and had to physically defend herself.” The next morning, he “apologized profusely” and asked her to keep quiet about the incident. Chen-Oster eventually reported the groping to her supervisor, but he took no action, the lawsuit claimed. Her Goldman career was derailed. She was promoted once and her pay increased twenty-seven per cent. Her attacker, on the other hand, became a partner and saw his pay increase by four hundred per cent. (Goldman contended that Chen-Oster stonewalled an investigation. The firm declined to comment on the size of her alleged assailant’s pay increase.) More than seven years later, the case continues to wind its way through the court system.

Lisa Carnoy, who recently [left her senior position](https://www.reuters.com/article/bank-of-america-us-trust-carnoy/moves-u-s-trust-division-executive-lisa-carnoy-leaves-bofa-idUSL2N1LW1NJ “left her senior position”) at Bank of America after twenty-five-years there and at Merrill Lynch, briefly worked at Bear Stearns at the start of her career. She remembers there being just a handful of women at Bear in a professional class of more than a hundred. Managers placed all the women’s desks together, and that part of the floor was known as the “pink ghetto.” The rest of the office was decidedly more masculine. “It was a locker room,” she said. “It was horrible, but I just sucked it up for a year.”

Carnoy, who was ranked the fourth most-powerful woman on Wall Street, in 2013, by *American Banker*, said she simply learned to ignore the bad behavior. “Many of the women who do try to succeed in this world, including myself, are very driven and ambitious and are willing to put the terrible behavior to the side, to say ‘I want a long career and I am just going to ignore that compartmentalize that.’ ”

Carnoy said she thought about suing Bear Stearns because what went on there was so “despicable,” but then she thought better of it. “I remember thinking, ‘Wow, I can sue them but I want to be in this industry for the next thirty years’,” she recalled. The amount of potential compensation paid on Wall Street can cloud people’s judgment, she said. An executive’s annual bonus can be in the millions of dollars and if a woman experienced egregious harassment or criminal sexual assault on Wall Street, the settlement would also be in the millions.

Ellen Pao, who famously brought and lost a gender discrimination lawsuit against her former partners at Kleiner Perkins, a vaunted Silicon Valley venture-capital firm, told me that she, too, has been wondering why executives in finance have so far avoided the spotlight in the recent cascade of sexual-harassment stories. (During the trial, Kleiner Perkins denied in a statement that Pao was ever discriminated against and insisted that the firm championed women.) Pao told me that she thought part of the reason might be because that while women had won a few legal victories—and had received cash settlements—their careers had stalled afterward.

“I wonder if people learned from that to be more quiet,” Pao said, adding that she believed the settlements did not change the view in finance that women are unequal to men. “There were, I think, fewer strippers on the trading floors, but you didn’t see fairness and you didn’t see safe workplaces come out of it completely.”